Captain did his first BE100 class at Goring Heath nr Reading, a long drive and a long day with an early start of 4 am!

He was an absolute star, he hadn’t been XC since last June and hadn’t done a dressage test since October but flew round a technical but not over big XC track, he found the faster time easy and made nothing of the bigger fences finishing in 8th place on his dressage score of 35. His flying photo is below and you can see Ruby and Captains XC clips here.

Captain is now entered for a Novice, we are getting excited about his future.

Ruby also did her first BE100 her dressage of 31 was better than Captains although she was a little tense, a rail down SJ dropped her down the placings. She felt like she was flying XC but her little legs weren’t quite fast enough and 2 time faults slipped her below Captains placing.

Their next run at Sapey was cancelled following some typical April wet weather. A day off for us and ironically the sun shone all day meaning we were able to get lots of jobs done at home. We wormed the sheep, did 2 hours of fencing repairs and generally enjoyed the birds singing and the spring sounds, typing this a Crow and a Raven have just flown over, making me smile as the huge 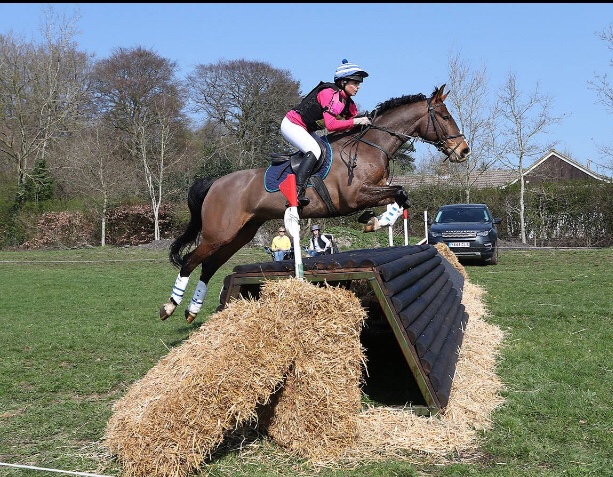 Raven is making an angry honking sound while the smaller Crow drives him off his territory! I even discovered some pretty yellow Marsh Marigolds growing in the stream when we lost the sheep down there!!